One of my paintings is a piece featuring a charming Scottish wildcat sitting in a bed of flowers. 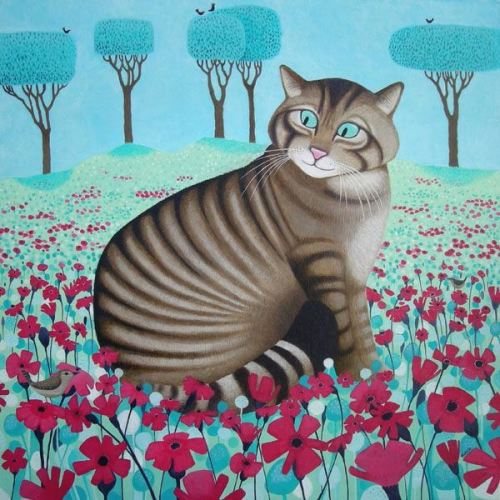 The SWA team were struck by the painting’s personality and colour.  Following a conversation with them I decided to donate a percentage of the sales profits from wildcat greeting card packs and prints to support the work of Scottish Wildcat Action.

SWA is partnership involving more than 20 organisations and its five year project aims to save the critically endangered Scottish wildcat from extinction. It is led by Scottish Natural Heritage (SNH) and is working to protect the species in five Wildcat Priority Areas – Northern Strathspey; Morvern; Strathpeffer; Angus Glens, and Strathbogie.

I am delighted to be working with Scottish Wildcat Action to help support our iconic Highland tigers, which teeter on the brink of extinction.

I have also supported Scottish badgers and have worked in the past with RSPB so nature conservation and wildlife are very close to my heart. If I can help in some small way through my art, to highlight the plight of the Scottish wildcat, then that is fantastic.”

Dr Roo Campbell, the priorities area manager for SWA, said: “When we first saw Ailsa’s painting of the Scottish wildcat we all loved it.

“It is brilliant that Ailsa has offered to support the project by highlighting the perilous position the Scottish wildcat finds itself in and we are so grateful she has decided to go even further and donate to the project through sales from her wildcat cards.”

Ailsa’s work captures the daily comings and goings of village life and regularly features wildlife.  It has seen her garner a sizeable following through her social media channels.